Here since 1979 thanks to your support

The telephone appeal was inspired by the success of the Telethon. In 1989 Kitty and her team decided that they could organise a small army of volunteers to ring their way through the Wellington phone book and ask for money. ‘We thought that if we raised a quarter of a million dollars it would be a pretty good weekend’s work. We asked every celebrity and well-known person in the Wellington region to take part.’ 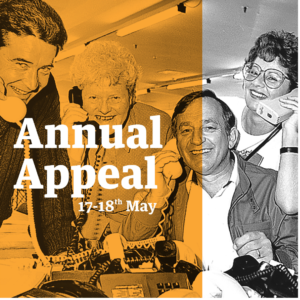 ‘Saatchi’s were fantastic: they developed a special campaign called “The Call for Help Telephone Appeal — for Mary Potter Hospice, Making the Most of Life!”. ‘We were given two empty floors of the DIC building to use as a base. Telecom provided 300 telephones, and all the radio stations promoted the event. I was forever in the media and talking to clubs, saying: “This is what we are doing; it is going to be so exciting. We need volunteers, join us, support us — it is going to be such fun.”

We recruited two and a half thousand volunteers out of Wellington; that is what we needed to man the 300 telephones in three-hour shifts. New Zealand Post printed A3-size phonebooks, every telephonist had a page of the phonebook, a ruler and a pencil, a pile of pledge forms and a box to put them in … the detail was amazing.’ The appeal won awards for Saatchi’s and Radio Station 2ZB, and a TAIF (The Australian Institute of Fundraising) award.

Kitty recalls that radio station Newstalk ZB broadcast from the venue the whole weekend. People spent hours sitting at their phones, waiting for them to ring, and once they did, were so generous that the computers couldn’t keep up with the pledges. ‘It was extraordinary. When we reached $500,000 early on Sunday morning, we were overwhelmed — I want to cry thinking about it. ‘By Sunday night $750,000 had been pledged, and we eventually banked over $800,000.

That telephone appeal was the most exciting thing I have ever done — and not just because of the money. We transformed the way people thought about the Hospice.’ Kitty notes that Saatchi’s spiel on why people should give money was very clever, because it was “about us”. ‘Mary Potter has benefited from that sense of ownership that every Wellingtonian has. It is “our” hospice. We created it.

Written by Bee Dawson, first appearing in ‘With You: The Mary Potter Hospice Story’