“I’ve had a fantastic life…”

Russell is one of our patients. He’s 59 and keeps himself fit by cycling and walking. He dictated his biography to one of the Hospice’s 16 volunteer biographers…

“When the people at Mary Potter Hospice asked me if they could share my story with you, I said ‘yeah, I’d like that. You’ve done so much for me, and I want to give a little bit back, so here goes… I’ve always been really fit and active. I was a professional footballer from the age of 16. That’s why I was so shocked to hear I had cancer. 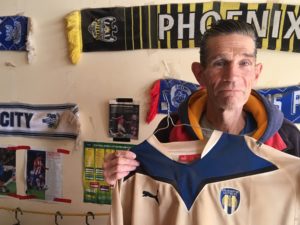 Football has been part of my life for 41 years, as a player and a coach. When I was really sick last year and I knew I won’t be able to coach, I nearly broke down. I wanted to die, I said ‘That’s it. I’ve got no life.’

The Hospice has been amazing. When I was really sick last year I needed to spend some time in the Hospice. If I won Lotto I’d give some to them because they looked after me. I was like a skeleton but they looked after me and I’m enjoying life again. The food is beautiful. I had problems with digesting food so they changed the food for me.

Alison, a social worker at the Hospice, has helped me out great in terms of forms so I’ve been able to move in to a new ﬂat. And the nurse comes round to see me at home. I’ve led a bloody good life, and I’m still young enough. I’m 59, alright it’s getting on, but I’m still young enough because I’m fit enough to enjoy what I’m doing. It may change of course. When I was first out of hospital, I absolutely couldn’t do anything, I was that sick. I hated every moment of it. Then I spent some time in the Hospice. 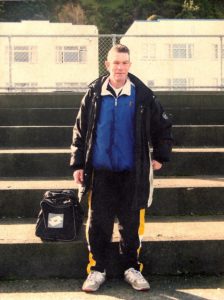 Russell’s made a big contribution to coaching talented young players all around Wellington. Here he is coaching for Marist AFC in 2000.

A couple of med students have been up around home and they go, ‘Wow, how do you do it? You’re still on your exercise bike.’ I said, ‘I’ve done it because it helps me, and I’m happy.’ But it does hurt sometimes, I am in pain. But if I couldn’t do it I think I would be miserable. I’ve had a fantastic life with my football, but the biggest game is fighting cancer. I’ll never get rid of it. I’ve got to take pain-killers, I’ve got to get certain things to eat and do it at certain times.

What makes me happy now are the little things in life, doesn’t cost you that much. I walk down that street in the sun with a cup of tea or a coﬀee or whatever. I’m making time to see my son, and the granddaughter. I’ve really tried to fight the cancer. It’s getting out and saying, ‘Right, I’m going to beat this bugger, because it’s the worst.’ What is it, the twenty-first century? We can go to the moon, and we can’t get rid of cancer, can we. I wonder why. You never know what’s coming up, do you. But all I can say is the Hospice has been amazing. Looked after me, and made me feel good again.”

“My life now consists of making the most of every moment. The Hospice looked after me, and made me feel good again. It’s been so great to know that they’re looking after me. If you’re able to give a bit so they can keep doing this for all of us who get sick, I think that would be fantastic. If you could please help them then they can keep doing this amazing work.”