“The Hospice do a great job.” Read Gary’s story.

It was a Christmas hamper that first got Gary Parsons involved with Mary Potter Hospice.

Gary worked for Richard Hislop Ltd, a Wellington importer of luxury food items such as Walkers Shortbread and boxed chocolates from Europe. These were just what the Hospice needed to fill its Christmas hamper raffle and they were happy to help. 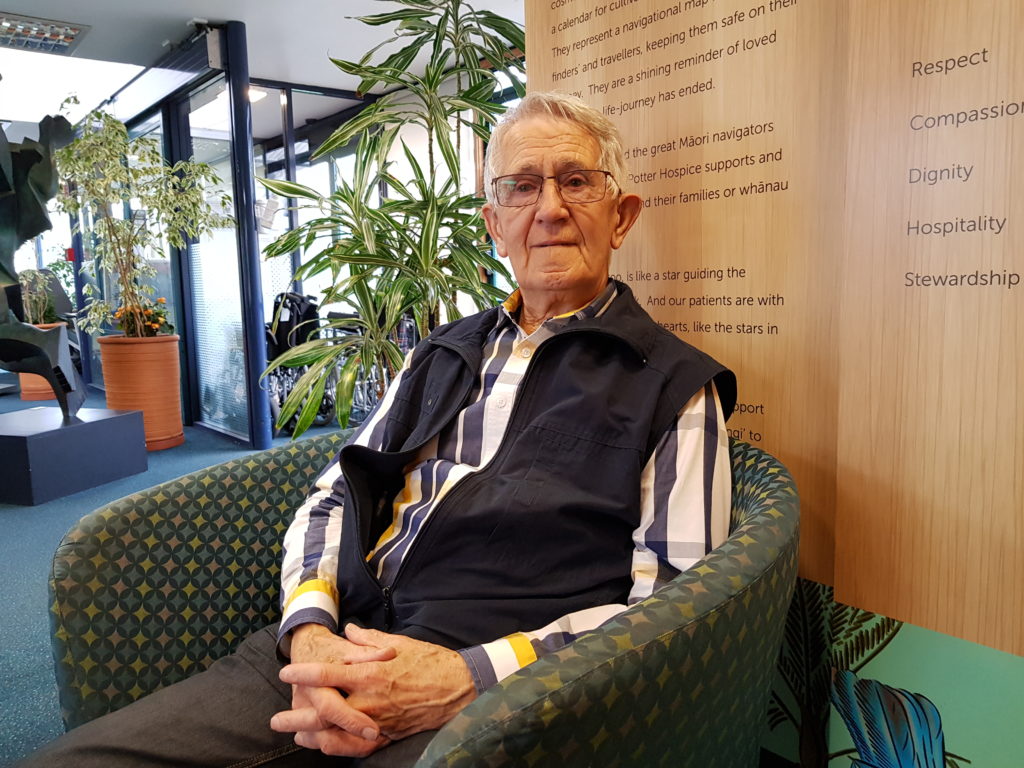 Gary Parsons, a member of the Camellia Heritage Club

Gary’s company – later becoming Abba Foods Ltd – stayed connected with the Hospice until he retired and leased his Thorndon Quay building to Mary Potter for its Thorndon Hospice Shop at a subsidised rental. Gary, who joined the company as a sales rep, had eventually became CEO, company director and shareholder. He leased the building to Mary Potter for six years until he sold it in 2018.

It was through Gary that his wife Pat started volunteering at the Hospice in Newtown, doing lunches for inpatients. She volunteered at Mary Potter for 11 years until 2009, then had to return in 2012 as a patient when she was diagnosed with brain cancer.

Gary says the tumour could not be completely removed. “She had the chemotherapy and the rest of it. But it carried on and she deteriorated. “She couldn’t live at home – she tried. The Hospice were very good. I came in and had lessons using the bed hoist, but it just wasn’t workable,” he says.

“When my wife was getting worse, we had a district nurse come in on a regular basis and we also had one or two nurses come in from the Hospice,” he says. Pat was admitted to the Hospice. “I think it was five weeks in the finish.”

Gary says Pat found herself among friends again at the Hospice. “She had finished volunteering a few years before this happened, but there were people still here who knew her from when she was a volunteer.”

Pat had her 10-year volunteer’s certificate on her wall surrounded by cards – many of them from staff wishing her well. “She was in really the best place that she could be in her condition.”

Since her death Gary has continued supporting the Hospice, including volunteering during the Street Day appeals and Strawberry Festivals, and through his work with the Karori Lions Club.

Gary says the bequest is partly in recognition of how the Hospice supported Pat and of her work for the Hospice, but also because of what Mary Potter does in the community. “They do a great job. A lot of people don’t necessarily have the financial resources and it doesn’t affect the standard of care. That is the important thing to me. It can help those in the community who are disadvantaged.”

We’re here to help, please contact us:
If you are thinking about leaving a gift in your Will, or want to know more about Mary Potter Hospice, our Bequest Coordinator Olinka would be delighted to have a quiet chat. You can contact Olinka on (04) 381 0163 or olinka.ching@marypotter.org.nz

Your generosity will mean so much to us.