We all have a story worth telling 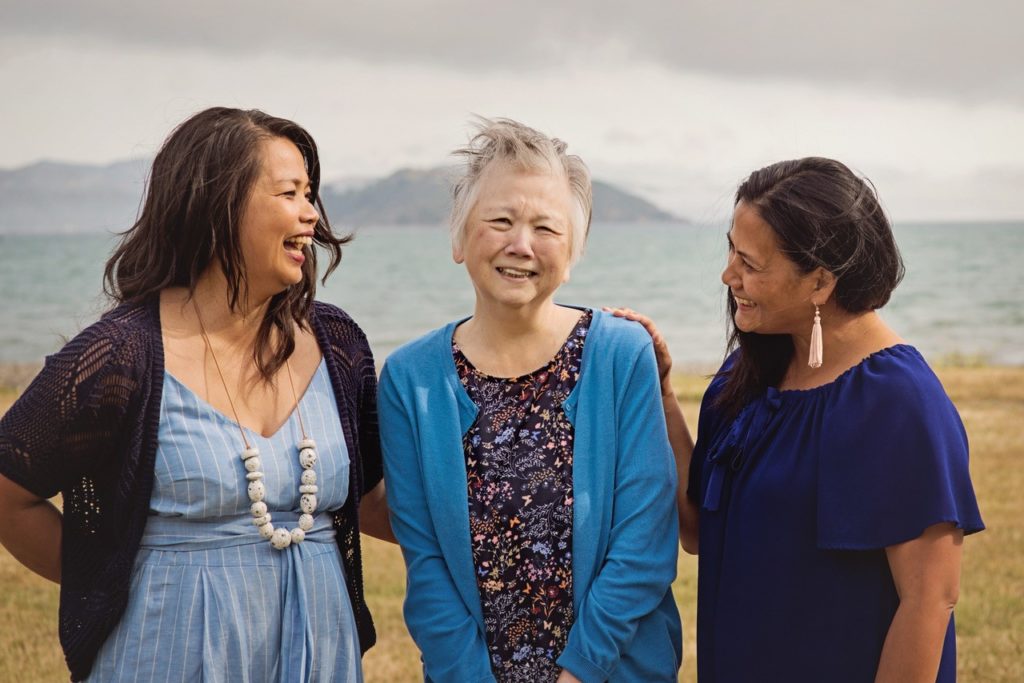 Sachi (left) and her sister Lagi Auva’a share a laugh with their mother Michi.

Sachi believes everyone has a story worth telling. As a Volunteer Biographer at Mary Potter Hospice, Sachi listens to patients tell their life stories and then helps record them in a biography which is given to family and friends. She was inspired to volunteer following her mother’s death in 2018. At 72, her Mum, Michiko (Michi) had been battling cancer for more than three years when she entered the care of the Hospice.

“Mum had kidney cancer which spread to her lungs,” Sachi says. “We did not use the Hospice until the last year of Mum’s life. It was such a huge help when we did.”

Sachi and her sister cared for Michi for most of her illness, apart from a six-week period when she was admitted to the Inpatient Unit.

“Mum was adamant she didn’t want to go to the Inpatient Unit. I think she was quite scared of what it would be like. Eventually, she just had to go because her pain couldn’t be controlled.”

It didn’t take long for Michi to feel at home. Sachi says her Mum was very comfortable in the Unit and learnt to trust the health professionals working with her.  It was also an opportunity for the family to learn how to care for Michi when she eventually came home.

“There was such a change from when she went in to when she was discharged. I think she was even a bit sad to go home. She really enjoyed her time there.”

Michi was at home for two months before she passed away. During that time, Hospice nurses visited her twice a day. They provided health care, but also encouraged and supported Michi and the wider family, Sachi says.

“Mum was very fearful of dying, she thought it would be painful. The nurses kept reassuring her. That was so important to her. They would always take the time to hold her hand and look into her eyes. It gave her a lot of strength.”

Following her Mum’s death, Sachi felt a pull to support other families. When opportunities to volunteer as a biographer came up, Sachi applied. She knew how important a loved one’s life story is to their family. Her Mum had opened up more about her own past when she knew she was dying. Michi had been born in an internment camp in America at the end of the war after her parents had immigrated from Japan in search of a better future. She was raised there before moving to New Zealand as an adult.

“It was amazing when she started to tell us her background and it gave context to a lot of things in our own lives,” Sachi says.

Interviewing people brings a huge amount of joy, Sachi says. Each patient has lived a unique and vibrant life and being able to sit with them as they recall their memories is a real privilege.

“As a biographer my job to capture memories and messages of love.  I know what it is like being a family member of someone who is facing the end stage of life.  I try to record their stories so that their loved ones will still hear their voices for generations to come.”

Two years on from her mother’s death, Sachi says she still misses her greatly. But she also finds comfort in knowing she able to help others who are going through a similar experience to hers. The first biography she ever did was with a woman who looked familiar. During the interview the pair discovered that they were long-lost childhood friends. Sachi had lived next door to the woman as a child, and had not seen her in over 30 years.

“Having experiences like that make me feel like I am doing the right thing. Everyone at the Hospice went out of their way to care for my Mum. Now, I am trying to do my part in giving back.  That’s my way of honouring Mum’s memory.”